A story, which starts, for me, with hearing a John Denver cover version from a giveaway Christmas vinyl,  bumping shoulders with Country Joe & The Fish and the Beach Boys, the inventor of the Orban Optimod 8100, a highly regarded New Age graphic artist, a Hawaiian musician/coffee farmer, and some wonderful music from the late 60s/early 70s which are now finding some deserved time in the sun and a hopeful a reissue coming soon.

I stumbled into this story after hearing a piece of music that just made me want to find out more. The track, a cover version of ‘Leaving on a Jet Plane’ which had the name Chet Gardiner attached to it.

This has to be the guy, right?

From Rock and Roll lead guitar in the 1960s, acoustic lead and rhythm from the 60s to the present, Folk, Rock, Gospel and Blues bass from the 70s to the present, Chet has been there through it all and, like some curmudgeonly Energizer Bunny, is still rockin’ on. Chet is also a seasoned recording engineer, sound man and CD producer.

Cool. I pop open my web message portal and type “Hi. Are you the Chet Gardiner who performed on the wonderful version of ‘Jet Plane’ I just heard?”

What came back surprised me. A wonderfully excited and friendly reply from Hawaii, and the whole story started to unfold.

So get yourself comfy. Ditch the dodgy free cushions that you get on long-haul flights and grab your favourite travel pillow. Lean your chair slightly back. Headphones in. Get ready to journey First Class…

A party. Redwood City hills on the S.F. Peninsula in 1969. Chet Gardiner meets and jams with a guy named Bob Orban. Things sound good and the two want to record together. Orban just happens to have a bunch of professional recording gear but no room to set up so they decide to set up in Gardiner’s basement.

A high end ragtag ‘home studio’ was assembled in that basement that included a 4 track Ampex AG-300 tape recorder (pulling 1/2″ tape), three Dolby A-301 noise reduction units, several incredible Neumann microphones; two U47s and three U67s, a Metrotech 500R 2-track 1⁄4” recorder for mixdown. There was also two input board/mixers that Orban built, one three-track with high-headroom mic preamps, and one 12-in/8-bus out for mixdown. (Bob needed more than 2-channel output from the mixdown mixer because it’s extra busses were used to drive an Orban/Parasound 300B Stereo Matrix, a spatializing processor that increases the apparent width of tracks originally recorded monophonically.)

We are talking about THE Robert Orban here

The guy who not long after this meeting founded Orban Associates, Inc. and introduced the world to his audio processors, including OPTIMOD-FM processors, which are among the most widely used FM processors in the world

In college Bob had originally built the three-track mixer from scratch, including metalwork that he created in the physics department’s machine shop. It served as the heart of a custom remote recording setup that Bob used to make extra cash for college expenses.

The combination of mic pre-amps that could take the output of the Neumann mics, closed-miking a drum kit without distorting and Dolby noise reduction on the multi-track and two-track mix-down tapes resulted in a very clean sound by the standards of the era.

This 4-track basement setup was used one afternoon by Chet and his brother Steve to record the basic tracks that included Steve’s lead vocal and 12-string rhythm guitar and Chet’s bass track on ‘Leaving on a Jet Plane’.

Shortly after that session, Bob rented a house in Menlo Park California.

For several months Bob Orban had rented his collection of (very expensive) Dolby-A noise reduction processors to the Beach Boys who used them to do the Quadraphonic mixes of ‘Surf’s Up’!

Bob and Chet assembled a recording studio in the living room of that house that included an upgrade to a 3M 8-track tape recorder and a stereo synthesizer based mixer. There were many pieces of one-of-a-kind outboard gear that Orban designed and built including a spring reverb with extended high-frequency response. This was used to record additional instruments and mix the final 8 track recording of ‘Jet Plane’.

The track was then sweetened by Chet adding harmony vocals to his brother Steve’s lead vocal. Steve was a folk singer in Washington, DC in the early 60s. They also added Bob’s Steinway, Farfisa and Hammond B3 organs added to the Fender Jazz Bass. Some Moog, Martin 000-28 acoustic guitar and whatever else happened to be lying around in the studio at the time was also used on the recording.

It was just a studio project that Bob and I did. We never gigged together although I was gigging with a number of other bands around that time…

A drummer was needed. Introducing Chicken Hirsch, he of Country Joe and the Fish.

Hirsch was set up in Bob’s living room studio and a play back of the first song for the session began. Hirsch listened for a bit, then took off his headphones and asked us,

Bob and Chet looked at each other and replied;

Hirsch soldiered through and did a rather good job of adding the percussion.

Bob then went out and, and on the advice of Bernie Krause and Paul Beaver (two of whose early-70s Warner Bros. synth-oriented albums he mixed), purchased a Billotti Trinome (a fancy metronome that could lay down beats in up to three time signatures simultaneously) for the guys to use in the future.

As Moog synthesizer pioneers, Paul and Bernie were well aware of the necessity of click tracks in that era before computer-based music production and timecode readers, where even big modular Moog synthesizers usually could only play one note at a time, requiring harmonies to be laboriously built up on multitrack tape, one musical line at a time in sync with the others, with the performer listening to the click to get the timing right.

From 1969 through the early 70s, at least 4 albums worth of material and another album of Bob’s material was recorded.

They tried to get a label interested but received no joy. By early 1970, the 60’s were over and the S.F. hippy dream was now just embers. Most of the recording companies’ A&R guys having left the city and gone back to wherever they came from.

The guys, now calling themselves ‘Summer Madness’, had an EP pressed. 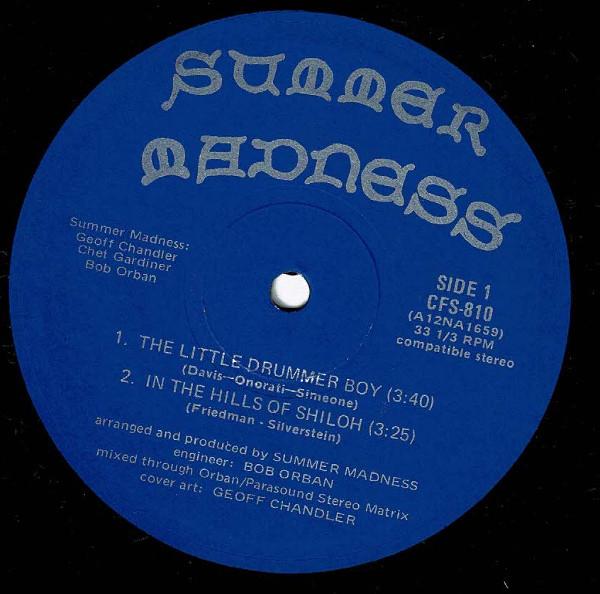 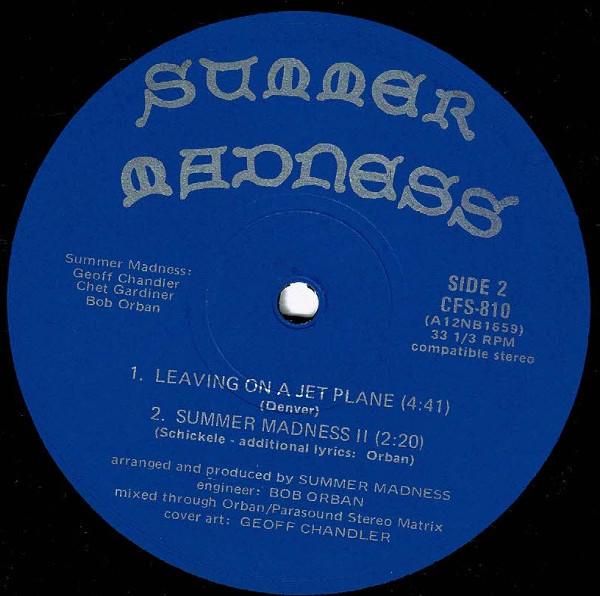 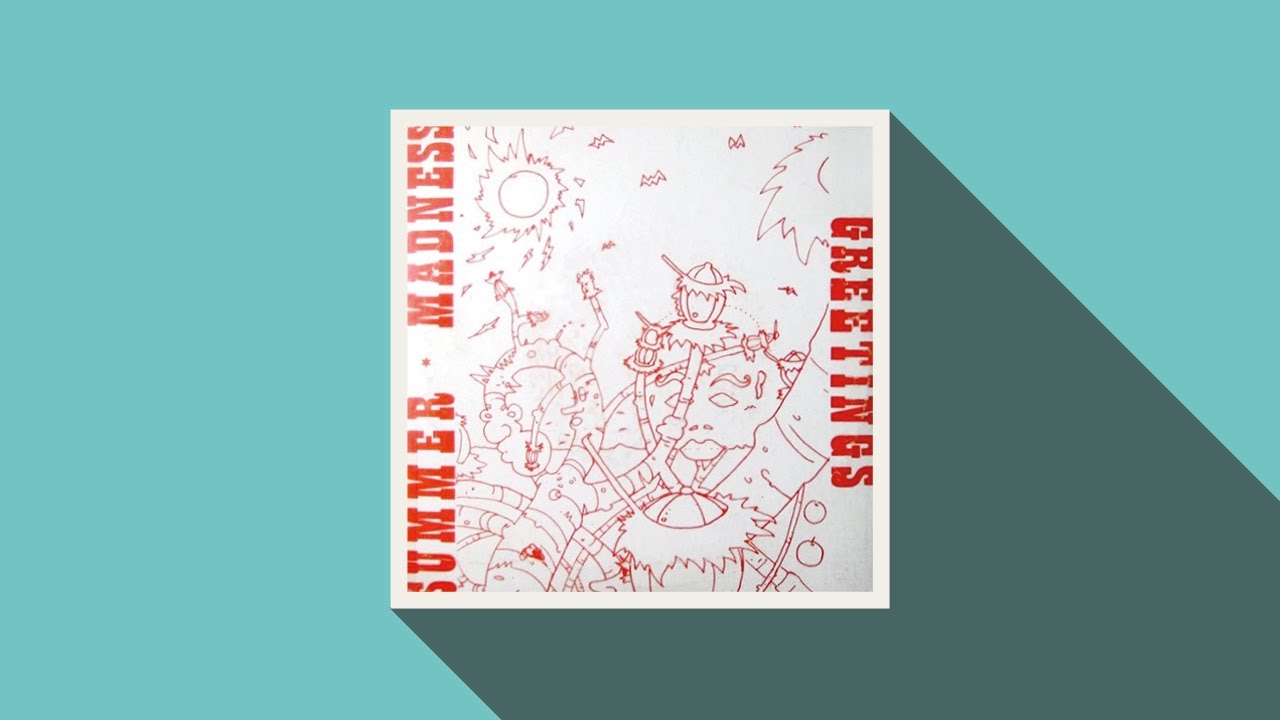 Primarily Christmas presents for friends and family, the EP included 4 songs; Leaving on a Jet Plane, The Little Drummer Boy, In the Hills of Shiloh (where Chet’s vocals were processed through Bernie Krause’s Moog synthesizer to achieve a strange ring-modulated, voice doubling effect) and a song called Summer Madness (with lyrics by Bob Orban and set to a Peter Schickele tune originally called ‘4:00 AM, June; The Sky Was Green’) which incorporated a really difficult doubled three-part harmony that took the guys two days to record.

The machine (in the centre in the image below) was the one used on the original basic tracks in the basement for ‘Jet Plane’.

Although the one Bob had was made portable by putting the transport and electronics into two quite large and very heavy trunks with a HUGE cable to connect them! 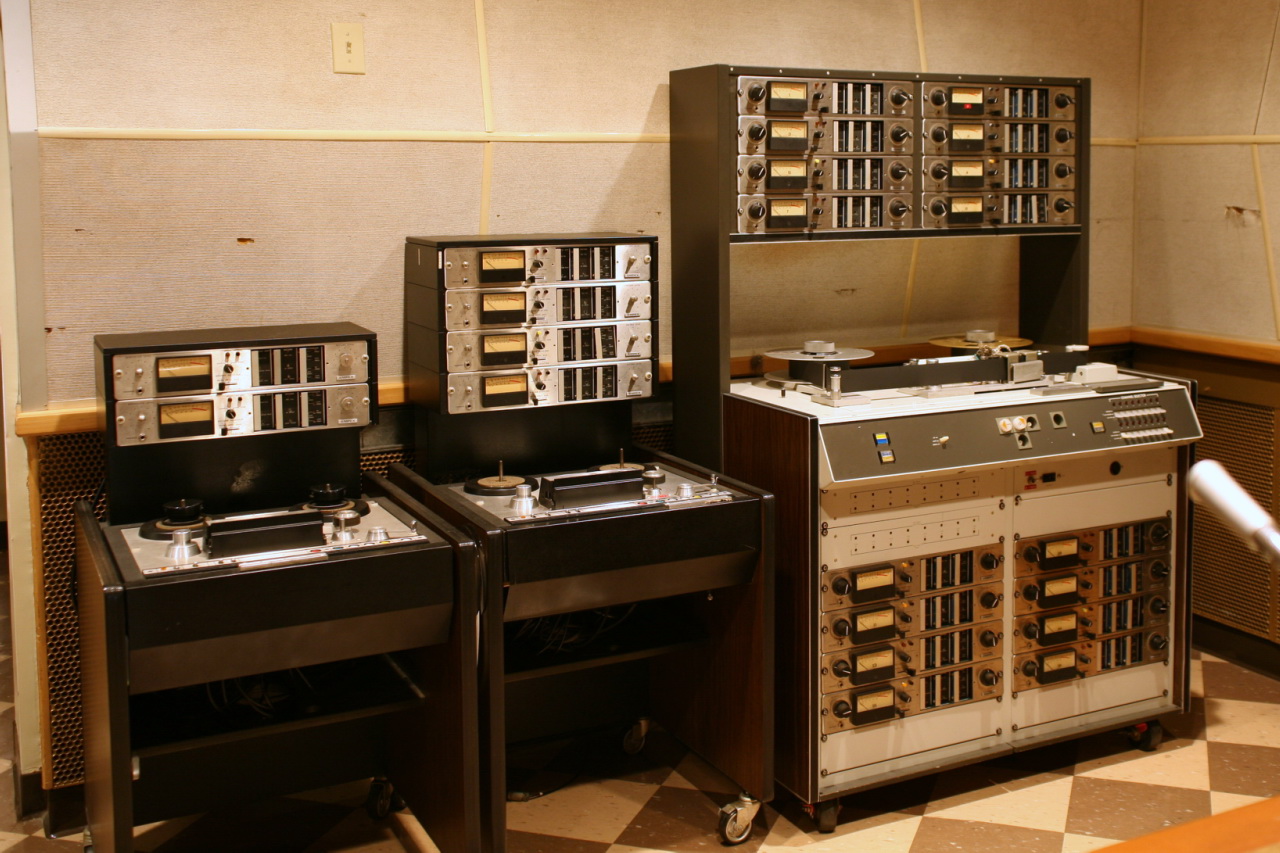 The four track Bob had resembled the machine in the center picture but it was (and may still be in his basement) an AG-300. 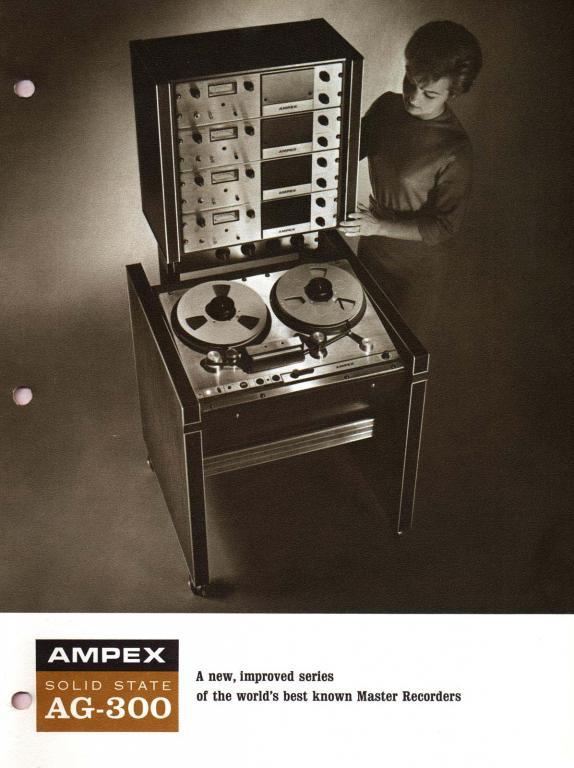 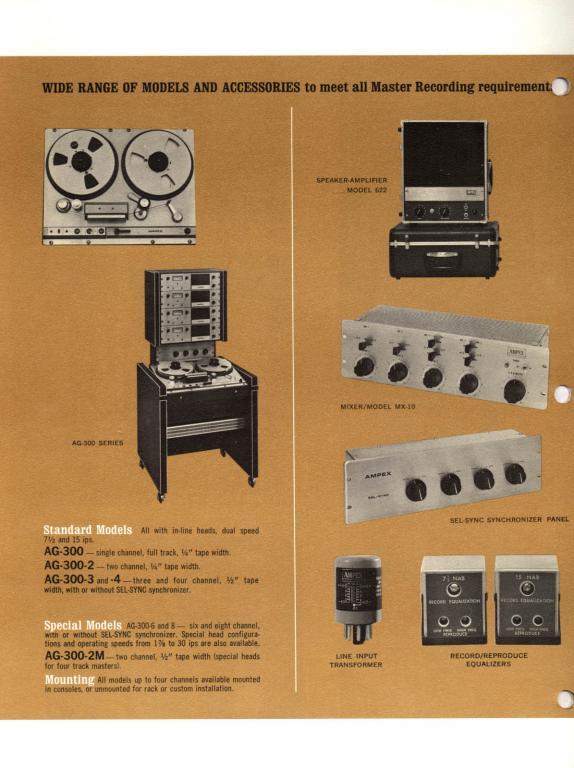 Geoff Chandler did the artwork for the EP. As more stars align, it turns out the San Francisco based artist is the same Geoffrey Chandler who made the one pioneering deep space ambient / new-age album ‘Starscapes’. 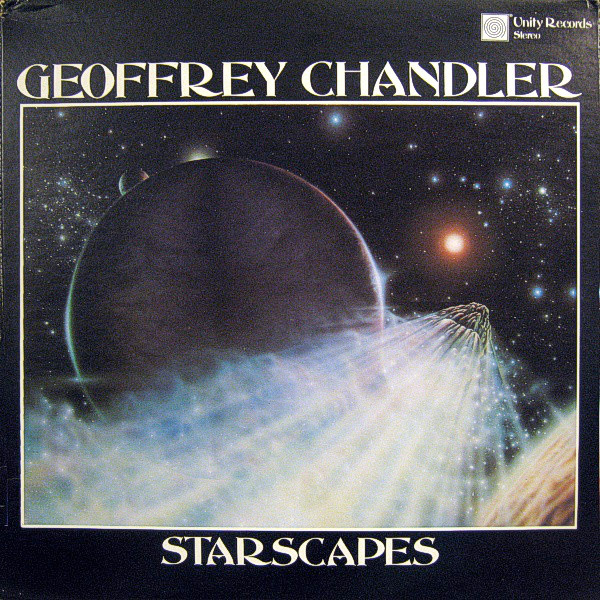 Released in 1980, the tracks of ‘Starscapes’ were recorded from 1974-78, mostly in the same Menlo Park house as the ‘Summer Madness’ sessions and with much of the same equipment. Although Geoff was mainly known musically as an electronic musician who used a Minimoog and Bob’s custom outboard equipment to build elaborate, deep soundscapes via multitrack layering, he also played drums and bass and enjoyed free-jamming with Chet and Bob. 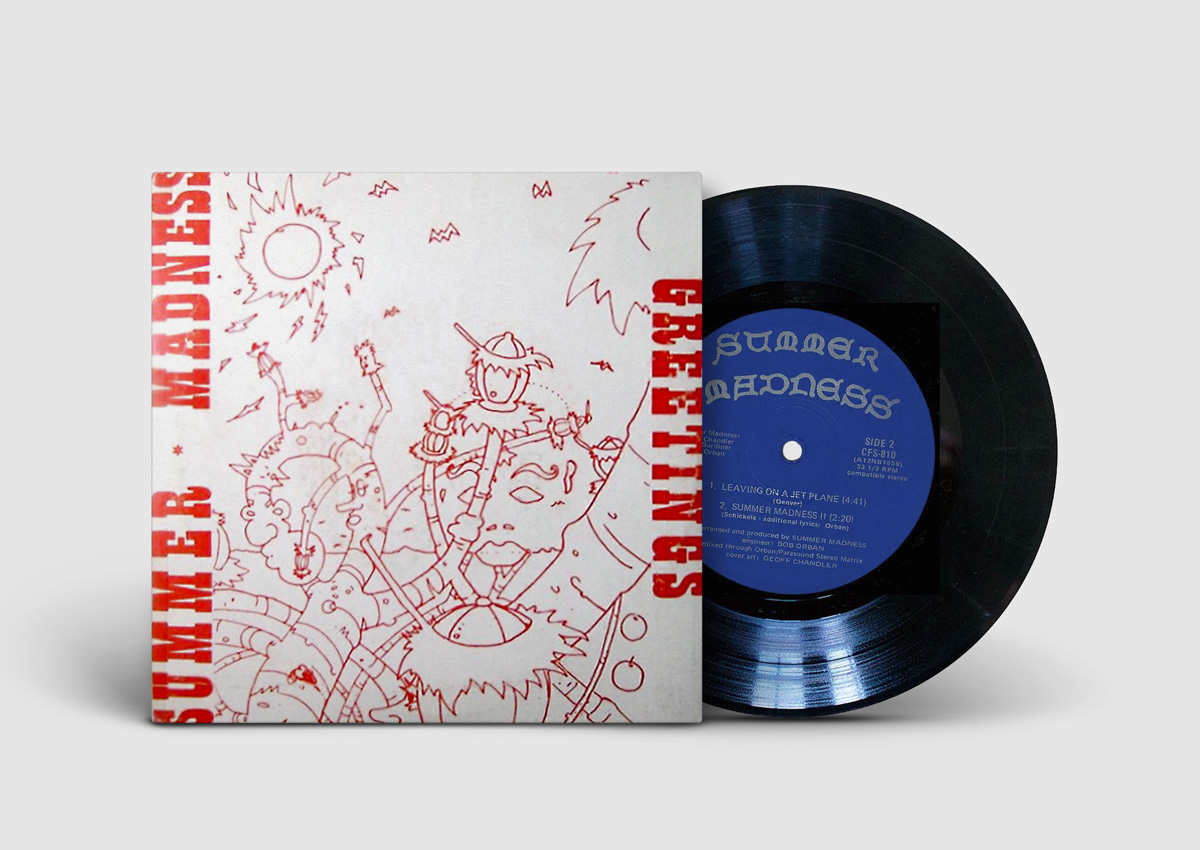 Geoff’s artwork also graces albums by Iasos and Constance Demby. Geoffrey Chandler left us for another journey in July 15, 2017.

Geoffrey, the man, had a hearty appetite for life and strong opinions. Loved surfing as a participant in his youth and later enjoyed surfing films.

He came of age at the height of the cultural renaissance of the 1960s and 70s, and experienced the full measure of the time. Enjoyed hosting parties of his friends, the community of artists in the Bay Area. Had a great knowledge of classical music and psychedelic music of the late 60s. Produced an album of his own space music in the 70s.

Geoff also loved the outdoors and his estate is donating to his favorite charity, Save the Redwoods League.

Only one other recording actually found its way to vinyl. On the following Christmas, using the IBM computer inspired term as the bands new name ‘The Interstitial Niche’, another self released Christmas present was pressed on to 45. It included an instrumental composed by Gardiner called ‘Snakedance’ on one side and on the flip a Robert Orban composition entitled ‘Credo’.

Bob is healthy and still quite active. His company Orban has been the benchmark for professional audio processing worldwide. It continues today to provide absolute state-of-the-art audio solutions for live performance venues. As well as content creators, radio, TV and Internet broadcasters.

Geoff entered a new journey on July 15, 2017. Primarily an artist, and based in San Francisco he also made the pioneering deep space ambient / new-age album ‘Starscapes’. His artwork also graces albums by Iasos and Constance Demby.

Steve is very retired and often has play-dates with his 3 year old twin granddaughters who live nearby. 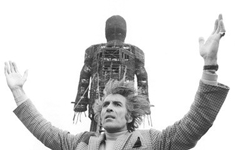 A heathen, conceivably, but not, I hope, an unenlightened one